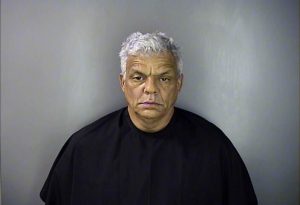 John Fitzgerald Anderson, 53, was found guilty Wednesday afternoon of exploitation of a vulnerable adult, receiving stolen goods, failure to stop for blue light, driving under suspension third and subsequent offense, and trespass after notice. A Greenwood County jury returned guilty verdicts on all charges after deliberating for just over three hours.

On May 30, 2017, members of the 89-year-old victim’s family filed a police report alleging that Anderson had been taking the elderly woman’s money. The elderly victim had been declared a vulnerable adult in November 2016. Anderson was put on trespass notice at that time and the banks were notified to contact the woman’s family if she showed with Anderson again.

On June 28, 2017, investigators were notified by the family and by a bank that Anderson and the victim had just withdrawn $300 from the victim’s account at First Citizen’s Bank in Ware Shoals. Deputies with the Greenwood County Sheriff’s Office spotted Anderson immediately and attempted to pull Anderson over. Anderson immediately began to flee from deputies and led them on a chase for nearly four minutes at a high rate of speed before crashing his vehicle.

Solicitor Stumbo praised the work of his staff along with Inv. Ronny Powell and Dep. Urban Mitchell Jr. of the Greenwood County Sheriff’s Office in securing the conviction.

“Only a despicable, wicked person would rob an elderly woman of her entire life’s savings,” Solicitor Stumbo said following the sentencing. “This victim and her late husband did everything right, saved their whole lives and retired to enjoy their twilight years. John Anderson took advantage of a lady’s generosity for his own selfish gain. We are satisfied that justice has been served and Anderson will be a resident of our prison system for a long time.”