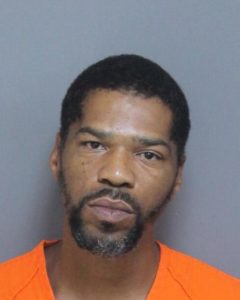 Laurens, S.C.; November 29, 2017 – Eighth Circuit Solicitor David M. Stumbo announced Wednesday that a Laurens man will be spending the next several years in prison after he threatened to kill two Laurens police officers and rape one of the officers’ infant daughter.

Henry Kevin Grant, 42, was convicted by a Laurens County jury on Tuesday evening of two counts of threatening the life of a public official stemming from an incident in June of this year.

Circuit Judge Frank Addy sentenced Grant to five years in prison on the first count, then to five years in prison suspended to three years of probation on the second count.  Addy ordered the sentences to run consecutively, with the probationary sentence to be served upon the completion of the active prison sentence from the first charge. The maximum sentence allowed under state law for threatening the life of a public official is five years.

In June of this year, officers responded to a call about trespassing. Grant was a bystander at the scene and began yelling obscenities at the officers. After several warnings to Grant to calm down, officers placed Grant under arrest for disorderly conduct. Once inside the patrol car, Grant threatened to rape the infant daughter of one of the officers. The officer took the threat seriously, noting that he had seen Grant in the area of his residence on multiple occasions in the past. While being transported to the detention center, Grant also threatened to kill the other Laurens police officer who responded to the scene.

Grant also pending charges for domestic violence and threatening the life of a public official related to a separate incident that occurred in July after he made bond on the June charges.

Assistant Solicitor Margaret Boykin and Deputy Solicitor Dale Scott handled the case for the state, with the assistance of 8th Circuit Inv. Walter Bentley. Grant was represented by Joel Broome of the Laurens County Bar.

Solicitor Stumbo praised the work of his prosecutors, working side by side with the Laurens Police Department officers, in securing the conviction on Grant.

“The threats made by this man were absolutely reprehensible,” Solicitor Stumbo said following the sentencing. “We send our officers out every day into harm’s way, and I will not tolerate the safety of their own families being threatened while they keep the rest of our community safe. We will always have the backs of our law enforcement community, and hopefully this conviction and prison sentence will re-enforce that fact.”