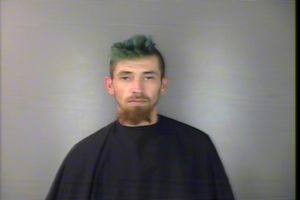 William Christopher Turner, 36, entered a guilty plea Tuesday on five counts of breaking into a motor vehicle and five counts of petit larceny.  On Monday, prosecutors called to trial one of the auto break-in incidents and picked a jury.  Turner changed his plea to guilty on Tuesday morning and also pleaded guilty to four other auto break-in incidents.  The pleas to the 10 charges were “straight-up,” meaning no negotiations were made as to sentencing by the State.

Circuit Judge Eugene C. Griffith sentenced Turner to 10 concurrent terms of 59 months (four years, 11 months) in prison. Turner was facing a maximum of 60 months (five years) in prison on each of the lead charges.

In December 2015, Turner was involved in a rash of vehicle break-ins in the Coronaca area. Turner would enter neighborhoods and look for vehicles that were unlocked. When he found an unlocked vehicle, Turner would rummage through it and take any items of value. Investigators estimate that Turner stole more than $5,000 in property during the spree.

The case was prosecuted by Assistant Solicitor Josh Thomas. Turner was represented by Carson Henderson of the Greenwood Bar.

The sentencing comes at a time when Greenwood County is again seeing a rash of vehicle break-ins where the vehicles are typically unlocked. Greenwood County Sheriff Dennis Kelly noted that these were crimes of opportunity.

“These thieves are looking for the easiest way they can to steal things,” Kelly said. “The Sheriff’s Office is encouraging everyone to lock their doors at night. Almost all of these break-ins have been on vehicles with unlocked doors.”

Solicitor Stumbo praised the hard work of Thomas as well as Lt. Scott Russ and Inv. Ricky Madden with the Greenwood County Sheriff’s Office in securing the convictions.

“Hopefully, this sends a message to those who are out there right now stealing from the hard-working citizens of our community,” Solicitor Stumbo said. “Our society demands that repeat property criminals like William Turner be held accountable for their actions. My office will continue to fight alongside Sheriff Kelly and his deputies on behalf of the people of Greenwood County.”