Greenwood man sentenced to 40 years in prison for 2016 killing 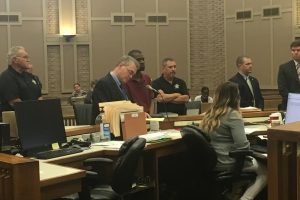 Demorris Andrews stands in court following his conviction on three charges related to the 2016 shooting death of 57-year-old Barry Warren.

Greenwood, S.C.; July 20, 2018 – Eighth Circuit Solicitor David M. Stumbo announced Friday that a Greenwood man was sentenced to 40 years in prison for the 2016 killing of a man he called a friend.

Demorris Ocswavia Andrews, 27, was found guilty of murder, armed robbery, and possession of a weapon during the commission of a violent crime in connection to the 2016 shooting death of 57-year-old Barry Warren. A Greenwood County jury deliberated for nearly seven hours across two days before returning the guilty verdicts.

The sentence on the murder charge must be served day-for-day according to state law.

On October 25, 2016 Andrews went to Warren’s home to rob Warren of drugs and money and shot Warren two times, killing Warren. Multiple witnesses placed Andrews at the scene of the crime and one witness, a former cellmate of Andrews, testified that Andrews confessed to the two were incarcerated together at the Greenwood County Detention Center. During one interview with police, Andrews asked for an autopsy photograph of the victim to hang on his wall.

“This is another senseless killing in Greenwood,” Assistant Solicitor Thomas told the court during sentencing. “I hope this sends a message to our community that we are going to prosecute these cases no matter what kind of record the victim has or what part of town they live in.”

Solicitor Stumbo praised the work of his staff, along with Sgt. Blake Moore, Sgt. Matt Blackwell, and Sgt. Wesley McClinton, and former detective Joe Collins of the Greenwood Police Department, for their work in securing the conviction and lengthy prison sentence.

“Our community has suffered enough at the hands of violent killers like Demorris Andrews who have no respect for the sanctity of human life,” Solicitor Stumbo said following the sentencing. “It’s time to end the silence from those who have witnessed these crimes and take the streets of our community back from dangerous, evil people like Andrews.”

This entry was posted in Uncategorized. Bookmark the permalink.