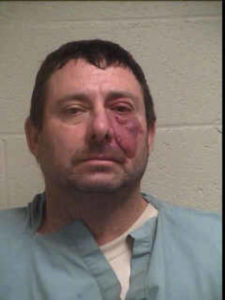 Greer Hanie Ashley Jr., 48, of Keowee Road, Honea Path, changed his plea to guilty on Monday afternoon at the Abbeville County Courthouse. Ashley’s case was scheduled to be called for trial by Deputy Solicitor Yates Brown and Assistant Solicitor Micah Black on Monday.

Circuit Judge Frank Addy Jr. sentenced Ashley to 15 years in prison. The crime is considered a serious, violent offense under state law and Ashley must serve a minimum of 85 percent of the sentence before being considered for parole.

In November 2016, deputies with the Abbeville County Sheriff’s Office went to a Keowee Road residence to assist officers with the Honea Path Police Department in serving arrest warrants on two individuals. As they approached the residence, deputies saw a man, later identified as Ashley, running through the woods with a plastic container.

Deputies pursued Ashley and placed him under arrest following a brief foot chase. Deputies found more than 970 grams of methamphetamine in at least 10 separate plastic bags inside the green container.

Ashley was represented by Bruce Byrholdt of the Anderson County Bar.

Solicitor Stumbo praised the work of his prosecutors along with the Sheriff Ray Watson’s Abbeville County deputies in securing the conviction.

“Greer Ashley has preyed too long upon the people of Abbeville County, selling poison and misery by the gram,” Solicitor Stumbo said following the sentencing. “This case is yet another example of the fine work being done by the men and women who stand on the thin blue line on a daily basis, by finding the drug dealers in this community and putting them behind bars.”

This entry was posted in Abbeville County. Bookmark the permalink.