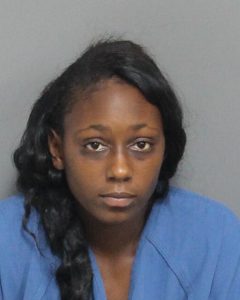 Laurens, S.C.; May 24, 2019 — A woman was sentenced to 15 years in prison after pleading guilty Thursday afternoon at the Laurens County Courthouse to a charge of inflicting great bodily injury on a child, 8th Circuit Solicitor David M. Stumbo announced Friday.

Erica Shunta Kelley, 25, was pleaded guilty to one count of inflicting great bodily injury on a child. Circuit Judge Allison Lee then handed down a sentence of 15 years in prison. The maximum sentence is 20 years in prison.

In July 2018, investigators received information that Kelley was abusing her 9-month-old baby boy. When investigators went to Kelley’s residence, they discovered the baby with numerous injuries indicative of severe abuse. The child was rushed to the hospital and found to have numerous bruises all over his body including his face, right arm was severely bruised and swollen, left arm and left leg were broken, numerous scars all over his body, and 10 healing rib fractures. Kelley admitted to physically abusing the child on multiple occasions.

Kelley has a previous conviction for unlawful abuse or neglect of a child stemming from a similar 2013 incident with another one of her children. She was sentenced to only three years in prison for the prior incident.

Solicitor Stumbo praised the work of his staff along with Capt. Tyrone Goggins of the Clinton Police Department in securing the conviction and lengthy prison sentence.

“From the time we are conceived, our mothers are supposed to protect and shield us from the harsh realities of this world,” Solicitor Stumbo said following the sentencing. “It is heartbreaking to see the abuse this 9-month-old child endured at the hands of the mother who was supposed to shield him from the very same evil she inflicted upon him. It is my hope and prayer that this young man can overcome his difficult start to life and can one day become the man he was created to be.”