Gray Court woman sentenced to 15 years for crash that killed one highway worker, injured another 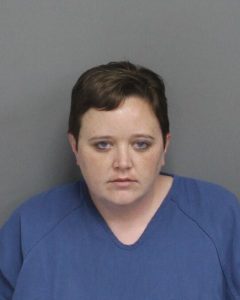 Laurens, S.C.; July 19, 2019 — A Gray Court woman was sentenced Thursday afternoon to 15 years in prison after a Laurens County jury returned a verdict of guilty on three charges related to the death of a highway worker and the severe injury of another, 8th Circuit Solicitor David M. Stumbo announced Friday morning.

Circuit Judge Roger Couch then handed down a sentence of 15 years in prison on the charge of felony DUI resulting in death and seven years in prison on each of the other two charges. The sentences are to run concurrently, but the defendant will not be eligible for parole and must serve a minimum of 85% of the 15-year sentence.

Just before 10:00 a.m. on March 28, 2018, Tackett was driving her 2012 Chevrolet SUV north along Interstate 385 near mile marker 19. Multiple orange state Department of Transportation signs warning drivers of road work ahead were staggered along the roadway leading up to the incident location. According to eyewitnesses, Tackett’s vehicle veered erratically to the left and struck the cable barrier in the median along with the victims’ parked work vehicle before striking two workers who were repairing sections of the cable barrier, 28-year-old Zechariah Ivey and 23-year-old J.C. Howell.

Both men were seriously injured as a result and were transported by helicopter and ambulance to area hospitals for treatment.  Ivey succumbed a week later to his injuries.

Solicitor Stumbo praised the work of his staff along with the South Carolina Highway Patrol in both the March 2019 trial which resulted in a hung jury and this week’s trial which resulted in convictions on all counts.  The Solicitor also spoke highly of the patience and resolve of the surviving victim and both victims’ families who have endured much suffering as a result of this tragedy.

“We’re satisfied that, after two week-long trials, the defendant is finally being held accountable for her actions and the horrific loss of life in this case,” Solicitor Stumbo said following the trial. “We will continue to stand shoulder to shoulder with our hard-working state troopers to keep our roads safe from impaired drivers.”