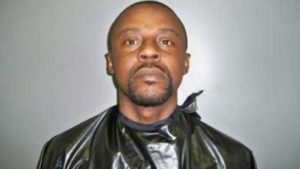 Laurens, S.C.; July 1, 2016 – Eighth Circuit Solicitor David M. Stumbo announced Friday that a Clinton man was sentenced to two consecutive life sentences plus five years for the 2011 murder of his girlfriend and a deputy with the Laurens County Sheriff’s Department.Benny Brown Jr. was found guilty Thursday of two counts of murder and one count of possession of a weapon during the commission of a violent crime after a Laurens County jury deliberated for a total of about four hours. The jury reached the verdicts Friday morning after deliberations were halted Thursday night at about 5 p.m.

Circuit Judge Frank Addy Jr. handed down the sentence following the reading of the jury verdicts.  Judge Addy addressed the surviving children of Deputy Roger Rice Jr. and Nicole Kingsborough at the conclusion of the sentencing hearing before addressing Brown directly.

“It is with great pleasure that I sentence you to the South Carolina Department of Corrections for your natural life, Judge Addy stated. “Goodbye.”

On July 13, 2011 Brown followed Kingsborough to the Fehrer Plant in Fountain Inn, where Kingsborough was about to start her shift, and shot her from point blank range while she sat in her locked car in the parking lot. The two had been involved in a long-term relationship spanning about two decades though they had recently separated.

Law enforcement tracked Brown to his residence on Barrel Stove Road in Clinton where a standoff took place. Shortly after officers arrived, Brown exited the residence firing shots into a crowd of family members gathered in the front yard.  Deputy Rice was struck and killed by a gunshot from the same gun with which Brown had killed his Kingsborough less than an hour before.  Brown and another family member were injured in the ensuing exchange of gunfire.

Kingsborough left three children behind, while Rice left behind a wife and two young children.

Deputy Rice had only been employed by the Laurens County Sheriff’s Office for about 18 months prior to his tragic death.  Rice has been described by all who worked with him as a fantastic young deputy with a bright future in front of him.

Solicitor Stumbo released the following statement after the verdicts and sentencing:

“As chief prosecuting attorney for the 8th Circuit, I fear that the death penalty is being slowly eroded out of existence in our country since the 2003 U.S. Supreme Court decision of Atkins v. Virginia.  Our criminal justice system has increasingly taken sentencing decisions on life or death for killers out of the hands of our citizen jurors and placed those decisions in the hands of paid psychiatrists and psychologists.

“However, after five long years of pressing forward in this case, I am satisfied along with the law enforcement community, the family of Deputy Roger Rice Jr., and the family of Nicole “Peaches” Kingsborough, that a large measure of justice has finally been achieved through these jury verdicts, and the consecutive sentences of life without the possibility of parole for Bennie Ray Brown.  The relief and closure that we are left with today cannot be quantified with words.  Rest in peace Roger.  Rest in peace, Nicole.”