Georgia man sentenced to 26 years for murder of potential witness 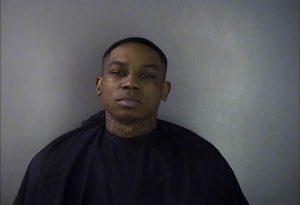 Greenwood, S.C.; June 4, 2018 – Eighth Circuit Solicitor David M. Stumbo announced Monday that a Georgia man was sentenced to 26 years in prison for his role in the killing of a 21-year-old Greenwood man who was cooperating with police on another crime involving the Georgia man.

The case against Parks was scheduled to be called for trial during the June 11 term of court in Greenwood County.

In November 2012, Parks and at least one other individual went to a residence on Moss Creek Lane in Greenwood and fired two shots into the window of the residence, hitting Lester in the back. Officers with the Greenwood Police Department were able to revive Lester at the scene, but Lester succumbed to his injuries a week later at Self Regional Healthcare.

Parks and Lester were involved in an armed robbery incident together in which a person was shot. Lester gave a statement to police about the incident. After Lester provided the statement to police, Parks and another man, Blake Parrish, began looking for Lester. Parrish received a text message from someone inside the Moss Creek Lane residence stating that Lester was at the residence. Parks, during the plea proceeding, asserted that it was Parrish who pulled the trigger. Parrish was charged in connection to Lester’s killing, but died in 2016.

Parks was located just days later in the custody of authorities in Georgia on unrelated assault charges. Parks was released in January of this year and immediately turned over to authorities from Greenwood.

Solicitor Stumbo praised the work of his staff along with Lt. Mike Dixon, Capt. Travis Anderson, and Sr. Master Patrolman Wesley McClinton of the Greenwood Police Department in securing the conviction and lengthy prison sentence for Parks.

“Our community should never become desensitized to the senseless taking of another life, especially when a victim like Kiwan Lester is killed simply for trying to do the right thing,” Solicitor Stumbo said following the sentencing.  “Our folks have worked very hard over the past five years with the city’s investigators to finally bring this dangerous killer to justice, despite major obstacles to prosecution.  My hope is that the Lester family can now finally begin to heal.”