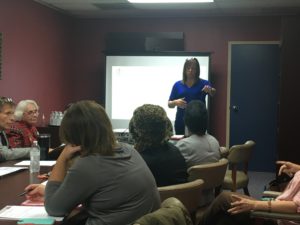 Greenwood, S.C.; November 2, 2017 – It’s a problem few want to talk about and even fewer fully acknowledge.  It is a growing problem not just overseas, but right here in our own backyards. While there are no firm statistics at this time, it is clear that human trafficking is a growing problem based on recent investigations that have uncovered predators sexually exploiting young men and women for profit.

Just over two weeks ago, the Federal Bureau of Investigation made 120 arrests and rescued 84 underage victims in an alleged sex trafficking ring that was operating across the country. Earlier this year, a Simpsonville man was arrested and accused of running a sex trafficking ring up and down the east coast, including South Carolina.

It was the realization that human trafficking is a problem right here in South Carolina that led Juvenile Arbitration Director Julie Bledsoe of the 8th Circuit Solicitor’s Office to seek out Jen Thompson, executive director of Lighthouse for Life, a Lexington-based nonprofit that seeks to raise awareness for human trafficking as well as assist the victims who are rescued from its clutches.

“Human trafficking has become an important issue, particularly in the world of juvenile justice,” Bledsoe said. “It seems like we hear a new horror story every week where dozens of children have been victimized and sold over and over again for the pleasure and profit of others. As laborers on the front lines of juvenile justice, I wanted our arbitrators to know what red flags to look for in children who may be trapped in a really bad situation.”

Thompson, who was a featured speaker at the annual S.C. Solicitor’s Conference this past September, was the main presenter at a training seminar in Greenwood last Thursday evening.  Thompson educated the volunteer arbitrators on the rise of human trafficking, and how to spot juvenile offenders who may also be victims of trafficking.

Thompson’s training equipped the arbitrators with another tool they can use to seek justice for those who come in contact with the juvenile justice system, according to Solicitor David M. Stumbo.

“Juvenile arbitration is the very essence of restorative justice,” Solicitor Stumbo said. “Armed with this information on human trafficking from one of the best sources in the state, our arbitrators can spot children who may be acting out because they are in a bad situation and don’t know any other way to get help. If we can identify those children then we can do everything in our power to help them.”

About Juvenile Arbitration: The 8th Circuit Juvenile Arbitration Program began in 1998 under Solicitor Townes Jones. There have been more than 4,000 referrals to the program since its inception. The program allows first-time, non-violent juvenile offenders the opportunity to complete a volunteer program as an alternative to entering the Family Court system and also allows the offender to his or her juvenile record clean. Juvenile Arbitrators are volunteers who have been specially trained to mediate between offenders and victims. There are currently 59 active Juvenile Arbitrators serving in the four counties of the 8th Circuit – Abbeville, Greenwood, Laurens, and Newberry.