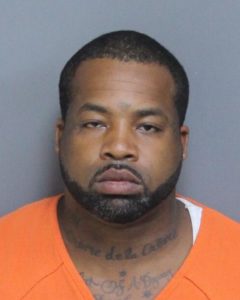 Laurens, S.C.; October 16, 2017 – Eighth Circuit Solicitor David M. Stumbo announced Monday that a Clinton man with a lengthy rap sheet dating back to 1998 was sentenced to 15 years in prison after pleading guilty to a drug charge at the Laurens County Courthouse.

Jeraka Jerome Choice, 37, pleaded guilty Monday to a charge of possession with intent to distribute crack cocaine, second offense, in connection with a 2016 incident. Choice’s case was first on the trial docket and was set to be called for trial had he not entered the guilty plea Monday morning.

During the sentencing, Choice’s attorney told Circuit Judge Frank Addy that Choice did not use crack and asked the court to “consider this is just a drug case” and that Choice “realizes that the true victims are himself (Choice) and his family.”

“I understand that you may be trying to support your family,” Addy admonished from the bench. “But you cannot support your children by poisoning other people’s children.”

Choice was caught with just under 6 grams of crack cocaine in July 2016 following a short foot chase with police. Choice’s criminal record dates back to 1998 and includes more than 20 convictions for crimes ranging from minor property crimes to five convictions for domestic violence to drug charges.

After considering Choice’s lengthy criminal record, Addy handed down a sentence of 15 years in prison. The offense is considered “serious” under state law and, because it is a second or subsequent drug offense, Choice must serve a minimum of 85 percent, or 12 years nine months, before being considered before parole.

Solicitor Stumbo praised the work of his staff along with Lt. Tyrone Goggins and Sgt. Stephen Lawton of the Clinton Department of Public Safety in securing the conviction.

“The idea that selling drugs only harms the drug dealer and his family is simply not true,” Solicitor Stumbo said following the sentencing. “There is a mountain of evidence that points to a direct link between drugs and violence. The citizens of Clinton can rest a little easier tonight knowing this menace to society will be spending a long time in prison.”

This entry was posted in Laurens County. Bookmark the permalink.