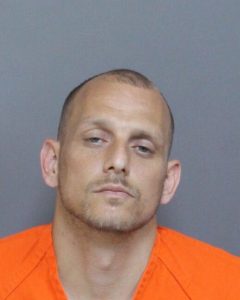 Laurens, S.C.; April 26, 2018 – Eighth Circuit Solicitor David M. Stumbo announced Thursday that a 15-year journey for justice in the brutal killing of 76-year-old James Bolt at the Laurens County Veterans of Foreign Wars building came to and when the killer was convicted and sentenced to life in prison following a trial at the Laurens County Judicial Complex.

Arthur Jason “A.J.” Bowers, 32, was convicted Thursday of murder, criminal conspiracy, and armed robbery in connection to Bolt’s murder in 2003. A Laurens County jury returned the verdict after deliberating for just under three hours.

In September 2003, Bolt was discovered in a pool of his own blood at the VFW building on East Main Street in Laurens where he was employed. The investigation led police to Bowers, who was 17 years old at the time, but charges were eventually dismissed by then-Solicitor Jerry Peace.

The investigation continued and new charges were filed in 2015 after new information about the murder surfaced. Doyle Wayne Roberts, known in the community as “Wanda Wayne,” was placed under arrest on an unrelated matter when he told police that his mother, 65-year-old Brenda Roberts, had washed the clothes of Bowers and another individual following Bolt’s murder.

Brenda Roberts was found guilty of accessory after the fact to murder on April 27, 2017 and sentenced to 14 years in prison, a sentence handed down by Circuit Judge Frank Addy as a message to Roberts – she was sentenced to one year in prison for every year justice for James Bolt had been denied.

Bowers was represented by J.G. Anderson of the Georgetown County Bar.

“The heinous and brutal killing of Mr. James Bolt, a well-respected man, rocked the Laurens community in 2003, and a piece of our innocence was taken,” Solicitor Stumbo said following the sentencing. “While we can never get that piece of innocence back, we can and will pursue those like A.J. Bowers who steal it for as long as necessary to bring them to justice. It is my hope and prayer that this day in court will be another major step towards peace and closure for Mr. Bolt’s entire family.”