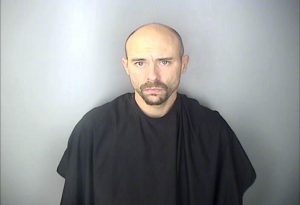 Greenwood, S.C.; October 2, 2019 — A Greenwood arsonist on Tuesday received the maximum sentence allowed under the law after he elected to change his plea to guilty on the day his trial was scheduled to start, 8th Circuit Solicitor David M. Stumbo announced.

Russell William Geddings, 34, pleaded guilty Tuesday afternoon to charges of third-degree arson and malicious injury to personal property. Circuit Judge Donald Hocker then sentenced Geddings to 15 years in prison for the arson charge — the maximum sentence allowed under state law — and 10 years in prison on the malicious injury to personal property charge, suspended to five years of probation. The sentences are to run consecutively.

In the early morning hours of December 5, 2018, Geddings went to the Walmart store located at 508 Bypass 72 NW and started a fire on a clothing rack in the men’s section of the store before fleeing the scene. Investigators circulated a surveillance photo through Crime Stoppers and a witness told investigators that she had spotted Geddings at the Greenwood Commissioners of Public Works building.

Investigators were able to confirm it had been Geddings at CPW and apprehended Geddings without incident. Geddings told investigators he set the fire as a diversion tactic while he stole a case of beer from the store. Walmart reported the fire did about $1.2 million in damage to merchandise in the store.

Yates Brown handled the case for the state, with the assistance of 8th Circuit Investigators Blake Moore and Michael Cox. Geddings was represented by Elizabeth Able and Tristan Shaffer of the Greenwood Public Defender’s Office.

Solicitor Stumbo praised the work of his staff along with the work of the Greenwood County Sheriff’s Office, particularly Maj. Cody Bishop and Inv. Matt Noblin, in securing the conviction and lengthy prison sentence.

“It is shocking to me that this man would put innocent lives at risk and destroy property just so he could steal a few beers,” Solicitor Stumbo said after the sentencing. “I am satisfied knowing that he will not be able to victimize the people of this community in such a manner for many years to come.”