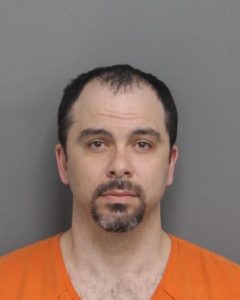 Laurens, S.C.; October 11, 2019 — Eighth Circuit Solicitor David M. Stumbo announced Friday that a Piedmont man with a long history of theft-related crimes was sentenced to 20 years in prison after pleading guilty Thursday afternoon to a charge of first-degree burglary stemming from a 2018 break-in in Laurens County.

Christopher Michael Massey, 37, of Piedmont, pleaded guilty to first-degree burglary Thursday afternoon at the Laurens County courthouse. Circuit Judge Eugene Griffith then sentenced Massey to 20 years in prison. The conviction is considered a violent offense under South Carolina law, requiring Massey to serve at least 85 percent of the sentence before being considered for release. Massey has a lengthy criminal history that includes a number of prior convictions for burglary.

In June 2018, neighbors of a Neely Ferry Road residence noticed the vehicle that is normally parked at the residence was missing and notified the family of the homeowner, who was on vacation at the time. The homeowner confirmed later the same day that a number of guns had been stolen from the home as well as some other items and the 1998 GMC Jimmy that was usually parked in the driveway.

Assistant Solicitor Wade Dowtin handled the case for the state with assistance from Victim Advocate Joy Lindsay. Massey was represented by Matthew Kappell of the Greenville County Bar.

Solicitor Stumbo praised the work of his staff along with Investigators Charles Nations, Andrew Turner and David Staton and Deputy Roderick Crosby of the Laurens County Sheriff’s Office in securing the conviction and lengthy prison sentence.

“Christopher Massey has proven time and time again that he has no respect whatsoever for his neighbors who have worked hard for what they have,” Solicitor Stumbo said following the sentencing. “For the duration of his adult life, Massey has been a thief and I am pleased to know that he will be in prison for a long time to come.”