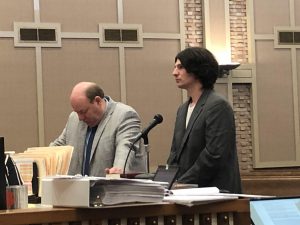 Joshua Eric Parham, right, stands with his attorney Charles Grose during a plea proceeding at the Greenwood County Courthouse.

Greenwood, S.C.; October 23, 2019 — Eighth Circuit Solicitor David M. Stumbo announced Wednesday that a Greenwood man will spend more than two decades in prison after being convicted of sexually assaulting a girl under the age of 13.

Joshua Eric Parham, 37, pleaded guilty Tuesday afternoon at the Greenwood County Courthouse to two counts of third-degree criminal sexual conduct with a minor. Circuit Judge Donald Hocker sentenced Parham to 15 years in prison on one count and seven years in prison on the second count, with the sentences to run consecutively. The crimes are considered violent under state law, making Parham ineligible for parole or early release.  Parham decided to change his plea to guilty as the case was scheduled to be called for trial by 8th Circuit prosecutors next week.

Parham was initially arrested in 2016 when the victim reported that Parham had sexually abused her on multiple occasions in different locations over a period of three years.  Parham was scheduled to appear in court in March of this year but failed to appear on the day his trial was scheduled to begin.  It was later determined that Parham cut off his ankle monitor, which he was required to wear as a condition of bond, and fled to Alabama.  In April, Alabama law enforcement officers apprehended Parham and held him in custody until he could be extradited back to South Carolina to await his new trial date this month.

Solicitor Stumbo praised the teamwork of his staff and the Greenwood County Sheriff’s Office in securing the conviction and lengthy prison sentence.

“I am extremely proud of the relentless work put in by my staff and our law enforcement partners to make sure this child abuser is removed from our community and in prison for many years to come, while also not subjecting this young victim to taking the stand at trial,” Solicitor Stumbo said following the sentencing. “We will continue to prioritize and fight for victims of predators like Joshua Parham.”