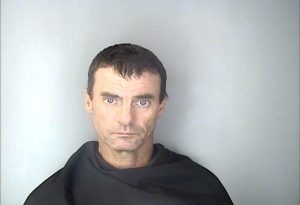 At about 9:45 a.m. on November 15, 2018, Alexander walked into the Wells Fargo branch located at 105 Main Street in Uptown Greenwood and passed a note to the teller saying there was a bomb inside the bank and that he had the detonator. The teller handed over more than $6,000 before Alexander fled the bank.

Police were immediately dispatched and spotted Alexander in a black Toyota Highlander fleeing the scene. Alexander led police on a chase down Cambridge Avenue and onto Old Ninety Six Highway where Alexander intentionally rammed a police vehicle multiple times, once directly in the driver’s side door. Alexander was eventually located and arrested at a residence on Reedy Creek Road.

Deputy Solicitor Yates Brown handled the case for the State, with assistance from 8th Circuit Investigator Windy Chappell. Alexander was represented by Walt Whitmire of the Greenwood Public Defender’s Office.

Solicitor Stumbo praised the work of his staff, along with the quick and effective response of the Greenwood Police Department and the Greenwood County Sheriff’s Office, in securing the conviction and lengthy prison sentence.

“William Alexander took a beautiful Fall morning in Uptown Greenwood and turned it into one of chaos and fear.  We are blessed that this incident did not end with anyone involved being seriously hurt or killed,” Solicitor Stumbo said following the plea proceeding. “My office will continue to stand shoulder-to-shoulder with law enforcement to do everything in our power to keep our community safe.”

Effective immediately, the 8th Circuit Solicitor’s Office no longer has a Worthless Check Program. If you have been written a bad check, please contact the Magistrate in the appropriate county or consult your attorney.