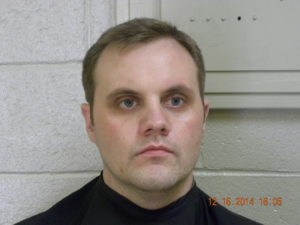 Greenwood, S.C.; February 27, 2017 – Eighth Circuit Solicitor David M. Stumbo announced Monday that a Greenwood man was sentenced to 13 years in prison for causing a fatal collision while intoxicated in 2014.Adam Rowell was convicted by Greenwood County jury on one count of felony DUI resulting in death and one count of felony DUI resulting in great bodily injury following a seven-day trial at the Greenwood County Courthouse. The trial began on February 13 and continued throughout that week, including all day on Saturday. Closing arguments were given on Monday, February 20, and the jury deliberated for about 90 minutes before returning the guilty verdicts. Circuit Court Judge Donald Hocker deferred sentencing until 10 a.m. this morning.

The sentencing range for felony DUI resulting in death is from one to 25 years in prison, and is classified as a violent, no-parole offense under state law.

On November 15, 2014, Rowell was driving along S.C. 225 about a mile from the intersection on U.S. 25 S. when he crossed the center line and collided head-on with another vehicle driven by 27-year-old Jeremy Cockrell.  Cockrell was pronounced dead at the scene, and a passenger in Cockrell’s vehicle was taken to a local hospital to receive treatment for severe injuries to his lower body.  Rowell was airlifted to Greenville to receive treatment for his injuries.  Rowell’s blood-alcohol content was .19 when he arrived at the hospital in Greenville around 9 p.m. that night.

Assistant Solicitors Micah Black and Wade Dowtin handled the case for the state with the assistance of Eighth Circuit Investigator Chris Wilkie.  Rowell was represented by Billy Garrett, Carson Henderson and Jane Merrill, all of the Greenwood County Bar.

Solicitor Stumbo praised the work of his staff along with Cpl. Cody Bishop and Trooper First Class Bronson Smith of the South Carolina Highway Patrol and Sgt. Al Duncan and Cpl. Kelly Anderson of the Highway Patrol’s Multi-disciplinary Accident Investigation Team in securing the conviction.  Many other public servants participated at the scene in the aftermath of the tragedy, including Greenwood County EMS personnel and John Long of the Greenwood County Sheriff’s Office, who was off duty at the time.

“Time and time again we have seen accidents caused by drunk driving rip families apart,” Solicitor Stumbo said following the sentencing.  “While this verdict and long prison sentence cannot bring Jeremy Cockrell back to his loved ones, it is my hope and prayer that it serves to give them some closure.”