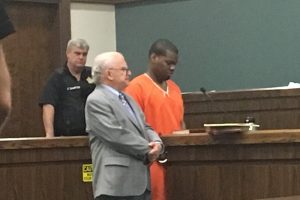 James Redd stands with his attorney, Billy Long during a Thursday afternoon plea proceeding at the Laurens County Courthouse.

Laurens, S.C.; August 30, 2018 – Eighth Circuit Solicitor David M. Stumbo announced Thursday that a Laurens child predator was sentenced to 25 years in prison after pleading guilty to assaulting three girls under the age of 9 over a period of about a year.

In October 2017, Redd’s then girlfriend suspected Redd of infidelity and began searching through his phone. She found a sexually explicit video depicting Redd with a child under the age of 5 who lived in the home. Redd’s girlfriend immediately notified authorities who then obtained a search warrant for Redd’s phone. On the phone, investigators found more video and picture evidence of Redd molesting two other children under the age of 9.

Investigators spoke with Redd and Redd admitted to committing the acts. Redd confessed to investigators that that he had been smoking marijuana and watching pornography, prompting him to begin acting out fantasies he had in his head.

Solicitor Stumbo handled the case for the state with the assistance of Assistant Solicitor Julie Kate Keeney and Victim Advocate Rhetta Christian. Redd was represented by Billy Long of the Greenville County Bar.

Solicitor Stumbo praised the work of his staff along with Inv. Jared Hunnicutt and Dep. Logan Kanipe of the Laurens County Sheriff’s Office in securing the conviction and lengthy prison sentence. Deputy Kanipe was with the Laurens Police Department at the time of the investigation.

“Our society has no room for sick sexual predators like James Redd, who exploit children for their own pleasure,” Solicitor Stumbo said following the sentencing. “I am glad that we were able to secure justice for these young victims without them having to relive the horror of the abuse in court. We will continue to stand shoulder-to-shoulder with law enforcement to pursue predators like James Redd and fight for our children.”