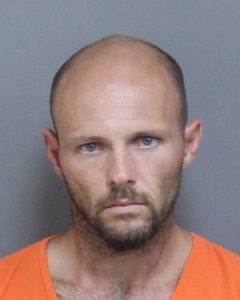 Bryan Lee Roeker, 35, pleaded guilty Tuesday afternoon to charges of possession with intent to distribute methamphetamine, malicious injury to property, and resisting arrest in connection to an incident in July 2017.

In July 2017, Roeker was attempting to break into the Cross Hill home of a 70-year-old woman. The woman went outside to feed her dog and spotted Roeker standing behind her residence. The woman immediately retreated back inside her house and called 911.

Deputies with Laurens County Sheriff’s Office spotted Roeker in the Cross Hill Town Park. When Roeker noticed the deputy approaching, he began to flee and ran inside the Cross Hill Volunteer Fire Department. Deputies waited outside the building and were able to apprehend Roeker after a brief struggle.

Solicitor Stumbo praised the work of his staff along with Deputy Darin Boyd of LCSO in securing the conviction and prison sentence.

“I cannot say enough about the great work done by my staff along with Sheriff Don Reynolds and his deputies in getting this career criminal off the streets and behind bars where he belongs,” Solicitor Stumbo said following the proceeding. “We will continue to diligently pursue justice until we remove every menace to society like Bryan Roeker from the streets of our communities.”