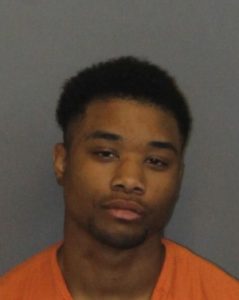 Laurens, S.C.; June 5, 2017 – Eighth Circuit Solicitor David M. Stumbo announced Monday that a Laurens man was sentenced to 45 years in prison for the brutal 2016 killing of 17-year-old Edwin Diaz.Fabian Green, 20, was found guilty by a Laurens County jury of murder and desecration of human remains in connection to the 2016 murder. The jury deliberated for about three hours before returning the guilty verdicts around 8 p.m. Friday night.

In May 2016, Green was one of three people who lured Diaz to Queen Circle residence. Green waited for Diaz to enter the residence before emerging from a bedroom and brutally attacking Diaz with a hammer. Green then loaded the body into a Ford Mustang that belonged to the victim and drove to a secluded wooded area outside of Clinton, where he burned the remains.

Diaz was reported missing on May 8, 2016 and an intense search for the teen spanned 18 days before his charred remains were discovered in the field near the abandoned Mustang. The remains had to be identified through DNA analysis performed by SLED investigators.

A note written by Green was intercepted at the Johnson Detention Center in Laurens as Green attempted to pass it to another man being held at the facility. The note described the killing in great detail.

Green was represented by Tristan Shaffer of Chapin, S.C.

Solicitor Stumbo praised the work of his staff as well as Lt. Ben Blackmon and Inv. Farrah Cook of the Laurens County Sheriff’s Office and Officer Nick Rosamilla of the Johnson Detention Center, who intercepted the note from Green.

“If you have any doubt, look no further than Fabian Green to confirm that ‘evil,’ as Judge Hocker correctly observed during sentencing, does indeed exist in this world,” Solicitor Stumbo said following the sentencing. “Nothing can ever erase the horror of what Green and his companions did. The law enforcement community can only hope and pray that the family and friends of Edwin Diaz can get some closure from this conviction and long sentence.”