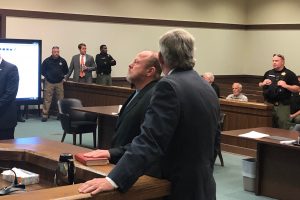 Ronald Derossett, left, stands before the court with his attorney, Bill Yarbrough, during a plea proceeding Friday morning.

On the evening of May 5, 2017, Derossett was traveling west along Highway 72/221 from Laurens to Greenwood near the Lander University Equestrian Center in his 1999 Jeep just before 9 p.m. when he attempted to turn left onto Evans Pond Road. Derossett never slowed down when making the turn and hit two motorcycles traveling east. The motorcycles were being driven by 45-year-old John Ruley and 57-year-old Tommy Burdette. Each of the motorcycles also had a female passenger. Ruley and Burdette were both pronounced dead at the scene. The two female passengers sustained significant injuries that will likely last many years. Derossett’s blood-alcohol level, which was tested by the State Law Enforcement Division, was .205, significantly higher than the state’s legal limit for intoxication of .08.

Derossett has a criminal history dating back to 1982. The convictions came from four different states and most were substance abuse related.

Solicitor Stumbo praised the work of his staff in preparing the case as well as the thorough investigation by the state Highway Patrol, in particular Sgt. Jamie Brown and the accident reconstruction team investigator Sgt. Tommy Brooks, in securing the conviction and lengthy prison sentence.

“There is absolutely no reason that John (Ruley) and Tommy (Burdette) should not be beginning to enjoy warmer weather as they ride their motorcycles with the ladies they loved,” Solicitor Stumbo said following the proceeding. “Instead, that night, Ronald Derossett chose to become grossly intoxicated and get behind the wheel of a vehicle. It is my hope that the families of these two men can begin to heal from this tragedy and that their legacies will live on for generations to come.”